Christopher Pitcher’s sixteen year career as a Licensed Funeral Director has taken him to many parts of New York and Vermont, half of his career he has worked as a Funeral Director in the City of Ogdensburg.   In April of 2016, Christopher with his business partner Nicole M. LaRue purchased Allen-Nichols Funeral Home, changing the name to LaRue & Pitcher Funeral Home.  Christopher is a 2001 graduate of Ogdensburg Free Academy and a 2003 graduate of SUNY Canton.  In addition to his career in Funeral Service, Christopher also works part-time for the Department of Homeland Security. He is married to Katie (Tinsley) Pitcher, formerly of Norwood, NY.

He serves on the Greater Ogdensburg Chamber of Commerce Board and the Salvation Army Advisory Board,  he is the President of the Ogdensburg Kiwanis Club, and a member of the Black Lake Hammond Lodge #319 and Chaumont Lodge #172 Free and Accepted Masons.

Christopher is committed to providing compassionate, professional and affordable service to those in their time of need.

Nicole started her career working with Allen-Nichols Funeral Home while she completed SUNY Canton’s Mortuary Science Program. In 2004 Nicole went on to serve her residency and over a decade of distinguished service as a funeral director at Lundy Funeral Home in Carthage.  In April of 2016 Nicole with her business partner Christopher C. Pitcher purchased Allen-Nichols Funeral Home, changing the name to LaRue & Pitcher Funeral Home.    She is a 2001 graduate of Ogdensburg Free Academy and a 2004 graduate of SUNY Canton.  She the daughter of Shelley and William Breen of Ogdensburg.  She is married to Steven LaRue they have two sons; Zakkary and Alexander.

Mike Myers is a resident of Ogdensburg, NY.  He graduated from OFA in 1991 and SUNY Canton in 1993 with a degree in Mortuary Science, then moving to Bronxville, NY.  There, he worked for McGrath & Son Funeral Home for five years, before moving back to Ogdensburg where he has resided since.  He currently works full time for the Department of Homeland Security and also serves on the Ogdensburg City School District Board of Education.  Mike is excited to get back into the Funeral Business to help serve and meet the needs of the local and surrounding communities.  .  He is married to Nikki (Perretta) Myers, he has three children; Hope, Myah and Michael Jr. 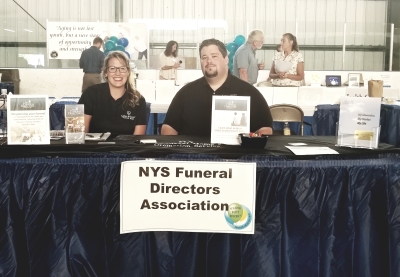 Founded in 1889, New York State Funeral Directors Association Inc. is among the oldest associations of funeral directors in the United States.

Headquartered in Albany, New York, the NYSFDA provides professional services and programming to benefit our members who serve the needs of families throughout New York State. We represent nearly 900 New York State funeral firms - all adhering to an enforceable Code of Ethics.