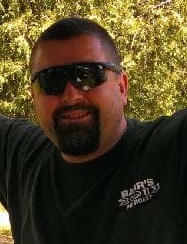 A visitation for Edmund A. Barr, 47, of Russell will be held on Saturday, January 2, 2021, at the LaRue & Pitcher Funeral Home from 2-4 p.m.  Mr. Barr died unexpectedly on Sunday, December 27, 2020, at the Claxton-Hepburn Medical Center Emergency Room. Arrangements are under the direction of LaRue & Pitcher Funeral Home, Ogdensburg. Edmund A. Barr was born on September 23, 1973, in Ogdensburg, he is the son of Daniel John and Hilda Jane  (Peck) Barr.  He was a 1992 graduate of Ogdensburg Free Academy.  On September 21, 2019, he married Jessica Whitford, a previous marriage to Renee Tatro Robinson ended in divorce.   Edmund joined the New York State Department of Corrections and Community Supervision in May of 1998.   Over the course of his 22-year career, he worked at Auburn, Greenhaven, Upstate, and currently, Ogdensburg Correctional Facility.   He was an avid hunter and fisherman, he enjoyed spending time on the St. Lawrence River, boating, and spending time with his family. In his younger years, he had fond memories of spending time at Granny Peck’s camp on the St. Lawrence playing cards.   The annual Barr Family Pig Roast was an event he would put on that all the Barr family would look forward to, as he loved cooking and was an excellent cook.     His greatest pleasure was spending time with his sons; four-wheeling, tinkering, and being at Hunting Camp.  He loved his many faithful Canine companions over the years.   He was a past member of the Constable Volunteer Fire Department and a member of the National Rifle Association. He is survived by his wife Jessica Barr of Russell, his parents Daniel and Hilda Barr of Ogdensburg, his sons; Eddie D. Barr of Virginia and Matthew J. Barr of Malone, his stepdaughters; Kelsie Leigh Matthews and Hailey Marie Matthews of Russell and his grandson, Bryce Walker Matthews.  His siblings; Elizabeth Jane Barr of Ogdensburg, Lt. Matthew John Barr and his wife (Stephanie) of Virginia, and Daniel Barr and his wife Marilyn of Ogdensburg also survive him.   He is survived by his nieces; Eliza Jane and Rachel Marie Hamilton of Ogdensburg, Brittaney and Felicia Barr of Ogdensburg and Valerie Matos and her husband Anthony of West Virginia.  He is also survived by his nephews; Adam Barr and his wife Morgan of Virginia along with his great-nephews, Aiden and Caleb Barr of Virginia. Donations in Edmunds's memory may be made to the Ogdensburg Rescue Squad 1223 Pickering Street Ogdensburg, NY 13669. Online condolences may be made at www.LaRuePitcher.com. PLEASE NOTE:  For those attending the calling hours on Saturday, January 2, 2020, from 2-4 p.m., COVID-19 safety protocols will be in effect, including; wearing a mask and social distancing.  Also, please be prepared to stand outside of the building while the line moves indoors, as only a limited amount of visitors are permitted inside the building at one time.  On behalf of the Barr family, we thank you for your cooperation.
To order memorial trees or send flowers to the family in memory of Edmund Barr, please visit our flower store.